A moie from director Katherine Bigelow (Point Break, Blue Steel, Strange Days, Near Dark, etc.). She is a female director that makes movies like a man.
The Hurt Locker is the story of the US soldiers in Irak who work with IED.

The judgements on the movie are quite controversial, but I believe it desreves to be seen, particularly by those who has been “in the box”. They only can really judge the movie. Anyway, for TIME magazine it is “a near perfect film”: 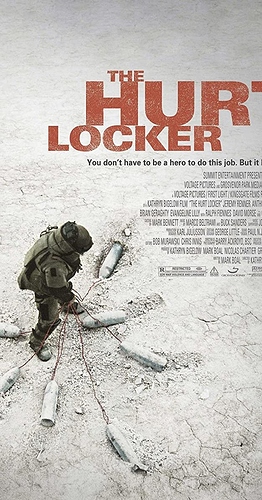 Directed by Kathryn Bigelow. With Jeremy Renner, Anthony Mackie, Brian Geraghty, Guy Pearce. During the Iraq War, a Sergeant recently assigned to an army bomb squad is put at odds with his squad mates due to his maverick way of handling his work. 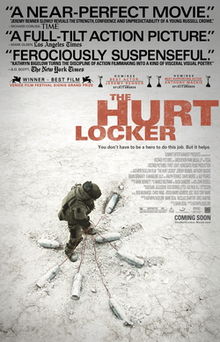 The Hurt Locker is a 2008 American action war thriller drama film directed by Kathryn Bigelow and written by Mark Boal. It stars Jeremy Renner, Anthony Mackie, Brian Geraghty, Christian Camargo, Ralph Fiennes, David Morse, and Guy Pearce. The film follows an Iraq War Explosive Ordnance Disposal team who are targeted by insurgents, and shows their psychological reactions to the stress of combat, which is intolerable to some and addictive to others. Boal drew on his experience during embedded acc...

My personal opinion: the movie shows how in Irak today is easy to die. Living every day life is much more difficult. (I would like to ear Arturo’s opinon, if he watches the movie)

Great Movie! Loved it even if it’s a hard one!

Bigelow is definitely one of my best directors

I saw it… great movie for sure, but there is not really a storyline. Not that it matters… in real Iraq there is no story line either.