Spitfire IX... axis too sensitive, how to set properly

Hi guys, very busy night yesterday with the new Spitfire.
At the beginning, we feel the Spit to much reactive, and impossible to fly with it.
But after a little set, now the Spit is AMAZING.

Open the Control Panel, Choose the Axis (Pitch for example), then click Axis Tune in the bottom of the page. 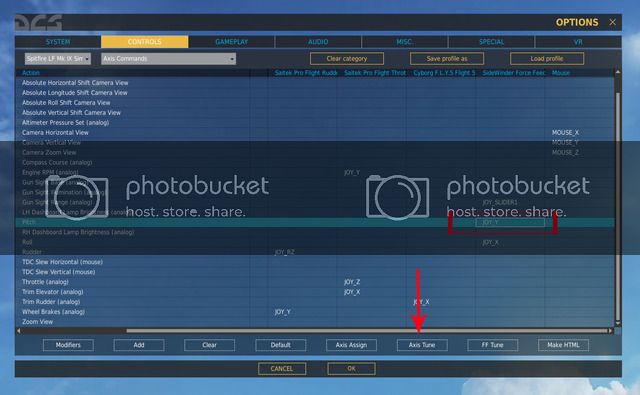 Now move the cursor Curvature to the right and set 30. 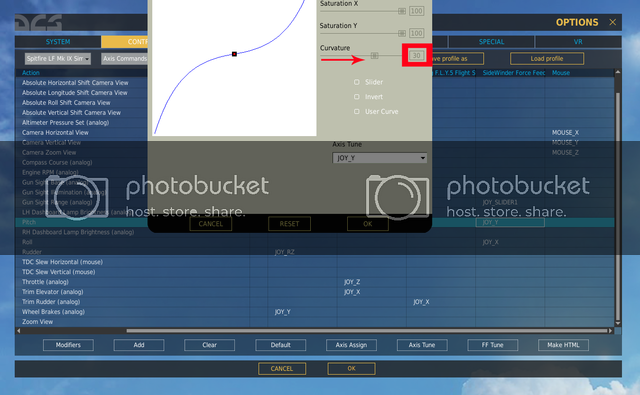 Thanks to EAF51_Cappe for the tip.

I have to check that. I have a suspicion that the update that came after the initial release changed something for me, but not sure (I first had an update that I downloaded right as I got home around 17:30 CET, and then another update when I tried it again some time after 21:00 CET).

I just did my first flight today, and hyper sensitivity made me loose two a/c during take-off.
I had to change the axis setting on the stick in order to get on.
It seems to me that the rudder is just as hyper sensitive as the stick.

Mikke, the first update was for the game engine, maybe, and the second was for the Spitfire? All we download 2 updates. I think that every plane we buy have to set properly in settings, the first time we use it.
For example, yesterday evening my stick (Microsoft FF2) was always between center and 3 o’clock. The Spit rolls at right and don’t work well. Cappe suggest to me to reverse the FF Force with the FF Tuning in Axis Pitch and Roll, and now works fine.

Nope, I got the Spitfire with the first update, just had to add it to my setup (add the key) before I could fly it, then when I started DCS again a couple of hours later it updated again.

Strange, I download the Spit AFTER the game update…And no more updates after…what kind of DCS have you got? 2.0 or 1.5 early access?

1.5 released.
Anyway, setting curvature to 20% made a big difference in both the Spit and the 51! I will probably tweak it a bit more, but it’s a start.

I changed to 20% pitch and 10% roll and rudder, feels fine for me now! Not sure the rudder part is necessary, but for the time beeing it’ll do.
Have spent a couple of hours flying off-line today, mostly Spit but also a little P-51, I’m really starting to like DCS…

I still have lots of problems with the spitfire, even with 40 curve on the elvator, the planes is really hard to trim in my opinion, i just can’t get what i want as on the Mustang, that i fly now like if i’m riding a bicycle…i’m not able to get there with the spitfre…anyway, love for the normandy map!

I’m still using the settings from DCS 1.5 and I have had no issue, love the way it flies - as Cappe about formation flying with a Spitfire and a P-51

Seems like yesterday i found my balance on the elevator…and surprisingly, the curve is very low, something like 15…and 80 Y saturation…i flies very well for my style. NOW I LOVE IT! Still a plane to be used gently…even in combat.

Seems like yesterday i found my balance on the elevator…and surprisingly, the curve is very low, something like 15…and 80 Y saturation…i flies very well for my style. NOW I LOVE IT! Still a plane to be used gently…even in combat.

Seems like i found my final curve, no saturation at all, 15 curve on the pitch axis. Find it lovely to fly