A Movie based on a true story.
Dieter Dengler, a german who came to america after the second world war to become a pilot (german airforce was forbidden) got shot down in vietnam war.

Seems as there won’t be very much flying (Skyraiders), but maybe worth looking, We’ll see

Bello!
Whant to see it!

Wow, that wiki on him http://en.wikipedia.org/wiki/Dieter_dengler is very inspirational, I will have to see the movie.

I finally saw the movie. Good to see! - Thanks Paf & Osprey
You can easily find it in download in the net

I alos saw the other movie, still by the same director, Werner Herzog, taken some years before (1997). This is the true story of Dieter Dengler with Dieter Dengler itself, telling its own story. It is probably even better then Rescue Dawn.
You can easily get this also through the net. Just add the magic word “torrent” to the title of the movie in your browser 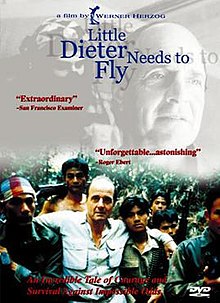 Little Dieter Needs to Fly (German: Flucht aus Laos, literally "Escape from Laos") is a 1997 German-British-French documentary film written and directed by Werner Herzog, produced by Werner Herzog Filmproduktion, and premiered on German television. The film was released to DVD in 1998 by Anchor Bay. Werner Herzog found a kindred spirit in a German-American Navy pilot and Vietnam veteran, Dieter Dengler. Like Herzog, Dengler grew up in a Germany reduced to rubble by World War II. Dengler's sto...

Just watched Rescue Dawn, excellent movie. Not so much flying, but good nonetheless.

Edited to add: The movie might not be so truthful http://www.rescuedawnthetruth.com/ but see it anyway!