Preparing for my return to simming

Hi everyone in EAF, how are you all doing?

It’s been more than 3 years since I last flew online. Recently I decided it’s time to pick that up again!
While I am saving for a new rig (CloD and BoS are slide shows on mine), I still use IL-2: 1946.

Flying alone is no fun at all. It just so happens I got started by someone whom I played another game with, and who is prepared to host some IL-2: 1946 missions every friday night.
So my next logical step was to update some missions to 4.12 standards and to publish them.

Now, all I need is to find out whether there’s still people in EAF flying IL-2:1946!
I have always enjoyed flying with the EAF immensely so it would be really fantastic to have a couple of pilots who have time on a friday night.

PS: here’s a presentation of what I’m working on at the moment: > CLICK <

Hi,
Welcome back. I don’t think any of us have touched 1946 for a few years, but it could be a laugh!

So good to hear from you and that you’re coming back to IL2
Like OD said, there aren’t many guys flying 1946 anymore. I really hope you get the new rig very soon as we need you in the other sims(BOX, DCS and Clod)
Looking forward to winging up with you again.

IL-2 1946 got thumbs down a few years ago from a majority.
I do miss it, but without a lot of people to fly with I havent really touched it.
It is still installed on my PC and I use it to compare and measure progress in Cliffs of Dover(CoD/CloD), IL-2 Battle of X(Stalingrad/Moscow/Kuban*)(BoX) and DCS.

Although EAF members voted CloD to be the default sim, the members are split between all the above sims.

This makes it difficult giving you advice in what to purchase, and anyone saying anything else is a liar.

What I will give is a rundown of the state of the sims and their current state.

Cliffs Of Dover
Aircrafts: 1939-1940 RAF/Luftwaffe/Italien
Theather: Southern England, Notheren France and a bit of Belgium
Realisme: More complex than IL-2 1946
Price model: You buy the sim and that is it. We expect that path 5.0 will cost extra

The sim is flyable and the modders patches are distributed over Steam which make is a breeze to install.
There are a large community in the ATAG forum
https://theairtacticalassaultgroup.com/forum/forumdisplay.php?f=91

We are all waiting for patch 4.5 which will add new aircrafts, upgrade DirectX, and kill a lot of bugs.
There will be no change to how to make major campaigns.

IL-2 Battle of X
Aircrafts: 1939-1943 Russin/Luftwaffe/Italien
Theather: Finland, Stalingrad, Moscow (Kuban will probably be released in september)
Realisme: Same complexity as IL-2 1946
Price model: There are 3 games with a common client and authorization system, which allows a customer to use them separately or as a combined product. Owning one give access to a map and a selection of aircraft.

This is without doubt the successor to the original IL-2 1946.
This sim is pretty much a mature product. Graphics have been updated and enable VR. The selection of aircrafts makes it a lot more balanced than CloD.
It currently lacks the ability to host servers without a special key from the developers which make the community dependent on what is already there.
The community are based over at https://forum.il2sturmovik.com/

DCS world is essentially a study sim. The flight-model and avionics are in the same segment as Microsoft Flight-simulator was.
The WW2 Normandy map is currently in an open Beta and you must have purchased it to fly on it.
It supports VR and if you buy it we recommend that you dont by it from Steam as it creates some limits.
I recommend talking to OD if you have question about this sim as I consider him our best resource on the subject.

The community can be found over at https://www.digitalcombatsimulator.com/en/products/world/

I own all of them and all the WWII aircrafts in DCS as the maps (which is an expensive as hell)
None of the Sims have any kind of access to campaign tool like Scorched Earth Online Warfare (SEOW) which is my major critique of all of them.
They all make promises for the future. The IL-2 BoX series roadmap is the most stable. They deliver on their promises on a timetable (sort of).
DCS comes in second but due to the complexity it takes longer. The modders of Team Fusion manged to get license agreements for CloD in the start of the year, but they are working in their free time. Their first result was to make their patches available over Steam which was a success. Patch 4.5 have finished development but are in testing and this can take many months. Essentially they don’t promise anything and have no timeline for their roadmap, but their results are good when they finally arrive.
But promises does not sustain a flight-simmer.

If your founds are limit You have to decide where you want to go.
EAF training program is still made for CloD, but I am sure some of our Training Officers are capable of teaching in BoX as well. DCS is another matter due to the complexity.

Each has a plus point, the difficulty with recommending Cliffs is the declining player base, but this could return once TF get their act together. Battle of Stalingrad has a reasonable player base, it is updated regularly and there are plans for a good few years. However, the updates are not cheap, but at the same time you can still play with others even if you do not have all of the modules; you’ll just be limited to the maps that you own. DCS is expensive, if you want a number of modules. However, DCS is very detailed and is also being constantly updated. In theory there should be a unified install in the near future (at present there are three potential versions, but only two really worth considering)
1.5 is the stable release with the free Georgia Map
2.1 is the Alpha release where you have to buy either the Nevada or Normandy maps
1.5.x is the Open Beta where they are testing elements of the 2.1 version in 1.5 before making them into a stable release.

The aim is that all will be unified into one install called 2.5 and then you will only need DCS World version 2.5 installed and you have access to a wide range of aircraft from different eras, but you’ll want to watch for the sales so that you’re not costing yourself an arm and a leg. I do have pretty much all of the modules now, the only one I don’t have is the CASA C.101. In my opinion it is my favourite, but Battle of Stalingrad is not far behind. Cliffs is like an ex-girlfriend some good memories but also some regret that it didn’t turn out as well as hoped…but she still hints about you jumping into bed with her again! It’s not got support for VR, which isn’t a problem for most people, it still looks great, it flies well and there are a number of things being fixed. I recommend getting Cliffs and then choosing either BoX or DCS. The benefit of DCS is that you can tryit for free and fly the Su-25T and the TF-51 Mustang (a two seat P-51D). This will give you a feel for the modern aircraft and the WW2.The TF-51 has a fully clickable cockpit the Su-25T is a more like an aircraft from BoX.

Hope that’s not too confusing.

Hi guys!
Il2-BoX is divided into 3 expansions, buying either one of them you buy it’s planeset and maps while maps from other two expansions are free to use for everyone in multiplayer so no one is restricted playing online and on certain server.
Also there are some collector planes such as spitfire mk.Vb, yak1b, fw190 a3/5, mc.202…etc.
Battle of Kuban is still in production but they release it bit by bit and next in line is Kuban map which will come in next two weeks alongside with new updated FM, final and official release of BoK is in december.
Next year they are planning to move on Pacific theatre.
Cheers!

It have been awhile since I last saw a colorful description of vehicles in a game.
In this case we are comparing Sims, But it leads me back to the time I drove race sims.

So here is an alternate description of the cars in GPL (Grand Prix Legends):

Ferrari - Fierce and passionate, with a little light spanking

Eagle - The best you’ve ever had…

Honda - slow drunken grind under the coats at a party

BRM - Gimp mask, bag of satsumas, a blow torch and a darkened room 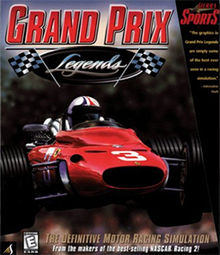 Grand Prix Legends is a computer racing simulator developed by Papyrus Design Group and published in 1998 by Sierra On-Line under the Sierra Sports banner. It simulates the 1967 Grand Prix season. The game offers several modes in which the player can race alone or against AI opponents. The game also features multiplayer via LAN. Many parameters affecting the skill and aggressiveness of the AI drivers can be specified. Inspired by the 1966 film Grand Prix, the developers chose to base the game o...

Thanks for the excellent information guys. I will use IL-2 1946 to get back into combat flying, and will switch to BoS and CloD as soon as I can. I already own CloD, so that has a really low threshold for me

I will keep you posted!

Hey Snafu good to hear from you, funny enough I just uninstalled 46 the other week due to disc space, which has now been filled up, so no go for me

Hey Snafu good to hear from you, funny enough I just uninstalled 46 the other week due to disc space, which has now been filled up, so no go for me

Hey Red! No problem, it’s a question of time I guess.

Ciao Snafu!! Nice to hear you again! Hope you’ll join us in the next weeks!!!

Will be much fun to fly with and against you once again.

Super!
really good news!
in the short time we are all on BOx so start there!SalvaSalva

Hi Snafu, I remember you form old IL2 days… I also had a long pause from simming and now Im back again. See you in skies.

Blackram (or BR?) check your PMs