As always, every film on our web site is showing for free. 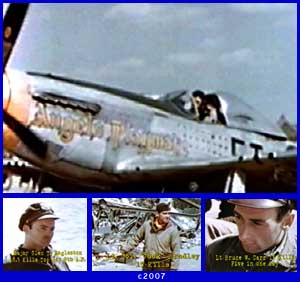 354th Fighter Group Color Scrapbook – Drive-In Exclusive! Rare color film of the legendary 354 Fighter Group, with over 700 Kills, the highest scoring American unit in Europe. You’ll see great aces like G. T. Eagleston and the amazing B.W. Carr at work and at play in their newly captured base in Germany in Spring, 1945. Nice scenes with the group’s well known P-51Ds too, including “Margie Maru” and “Angel’s Playmate.” This was the first group to fly P-51s in the ETO, so they were known as “the Mustang Pioneers.” 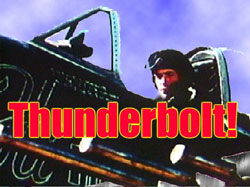 Thunderbolt! A Drive-In favorite! This exciting film chronicles the exploits of the P-47 Thunderbolt pilots of the “Fighting Gamecocks, 65th Fighter squadron, 57th Fighter Group. Based on the island of Corsica off the northwest coast of the Italian boot, they flew from behind the enemy’s flank. As part of “Operation Strangle,” they attacked highways, bridges, ammo dumps, railroads and just about anything that moved. This film not only features one-of-a-kind P-47 combat footage, it also shows day-to-day life on a MTO forward airbase, including vintage pilot slang. This has to be finest combination of great photography, a hard bitten, realistic script, stirring music, powerful narration and full bore Pratt & Whitney R-2800-59W Double Wasp radial engine roar I have seen or heard in a World War II documentary. Truly memorable and highly recommended. 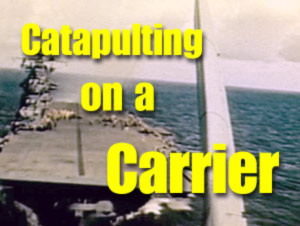 Catapulting on a World War II Carrier Small World War II aircraft carriers depended on their catapults. This unique film offers shows how (in color) US Navy carrier crews were trained to operate hydraulic catapults to launch aircraft, even from very short decks. As a bonus, you’ll see GM FM-1 “Wildcats” up close, handled expertly on the tiny deck of a CVE “jeep” escort carrier. Built on merchantmen hulls, the 78 jeeps were pressed into service in a variety of rolls, including anti-submarine warfare in the Atlantic and covering amphibious landings in the Pacific. Their greatest moment came on Oct. 30, 1944, in the battle of Samar in the Philippines, when the little CVEs of Task Group 77.4 (Task units “Taffy 1, 2, 4”) launched a furious attack on Adm. Kurita’s powerful task force and caused it to retreat. The CVE St Lo was lost and several others were heavily damaged, but the landing at Leyte was successfully protected. 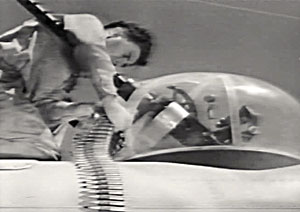 Bombers Over North Africa This is a rare look at early war US Air Operations in North Africa. B-25 and B-17 bombers of the 321st and 97th Bomb Group help cut off Rommel’s retreat from Tunisia. Part of the “North West African Strategic Air Force,” these groups were initially tasked with preventing men and material from reaching the Afrika Korps, and later with preventing them from escaping. The missions for the day of this film were to strike from bases in Algeria at the junction at Manouba and the air field at Sidi Ahmed, where a large number of JU 52 transports were based, a vital element in German evacuation plans. This film is notable for it’s “up close and personal” look at the aircrews. You’ll see real pre-mission and after action debriefing sessions with the men who flew them, including one B-17 crew’s account of an FW 190 shoot down and the water ditching of a heavily damaged B-25.

That’s over 14 hours of rockin’ World War II props for free viewing over the Internet!