You’re invited to drop by Zeno’s Drive-In www.zenoswarbirdvideos.com to take in this month’s six exciting air combat documentary films playing over the Internet. There’s a Drive-in Premier and four films commemorating the 66th anniversary of the daring low level B-24 raid on the Ploesti oil fields on August 1st, 1943 plus P-38 Action with “The Back Door Gang.”

Now showing At the Matinee at Zeno’s Drive-In 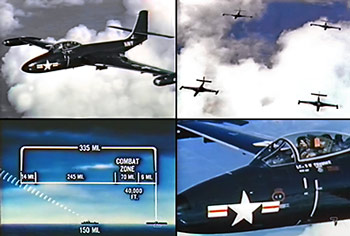 “Naval Aerial Tactics Featuring the F2H-2 Banshee” (Color) New - Premier! Produced by the Navy Department during the Korean War, this unique film is compelling today for two reasons. First, it features truly outstanding color footage of F2H-2 Banshee fighter/bombers operating singly and in squadron formation, dancing agilely among towering cumulus clouds. Second, it opens a fascinating window on US Navy carrier launched fighter operations and tactics at the time of the Korean War. The film addresses three main “problems” in aerial tactics: intercept, escort and attack, and defense. Using a combination of live action and animation, you’ll learn about how to optimize your approach angle for a minimum deflection gun shot when intercepting an intruding bomber (no air-to-air missiles yet!), Various squadron formations to suit different tactical situations, effective combat air patrol operations for carrier protection, options for escorting bombers to targets, optimizing fuel consumption in various operations, working effectively with carrier air controllers, carrier approach and landings, tactics for attacking enemy formations, and how to avoid stalls during combat, are just some of the subjects covered in this information packed film. We give it our highest rating for combat aircraft fans everywhere! 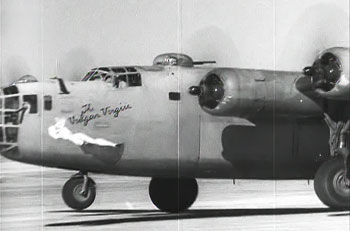 “The 98th Bomb Group: Liberators Over North Africa” Exclusive \production from Military Arts Pictures. This recently discovered footage shows Medal of Honor winner Col. John R. "Killer " Kane and the men of the 98th Bomb Group in the Summer of 1943, shortly before the heroic, costly Ploesti mission, at their desert base in Benghasi/Benina, Libya. You’ll see legendary B-24s like 'The Vulgar Virgin, “The Sandman,” and “War Cloud.” Sadly, several of these ships were filmed here for the last time before they were lost over Romania. There’s an unexpected gem too. Soon after the Axis surrender in Tunisia, 9th combat cameraman Jim Bray hitched a ride on a B-24 and filmed all the major North African targets the 98th had hit from the air, from El Alemein to Tunis. You’ll see Tobruk, Tripoli, Benghazi, Bizerte and more from the air, the way pilots and crew saw them during the Desert War. And the big Liberator goes in low too so you can take in sunken warships, clamoring liberty ships unloading their cargoes, and bombed out harbors that have long since been rebuilt. This is a priceless time capsule. 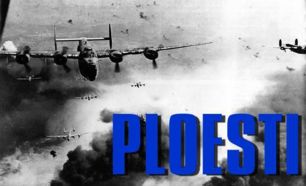 “Medal of Honor: Ploesti August 1, 1943” On August 1, 1943 specially trained elements of the 8th and 9th Air Forces flying B-24 Liberators based in Benghazi Libya launched a daring low level attack on Ploesti, over 1,200 miles away. They struck hard, but the cost was high. Unescorted by fighters and coming in literally at tree top level to surprise the enemy, 54 out of 162 of the attacking bombers were lost, along with 540 American air crew. Every member of the attacking force was awarded a medal, including 5 Medals of Honor, the highest decoration awarded by the U.S. military. Of the Medal of Honor recipients, only Col. Leon Johnson, 44th Bomb Group, and Col. Jon “Killer” Kane, 98th Bomb Group, survived the mission.
“Air Siege Ploesti: March to August 1944” The capture of the Foggia airfield in on the Adriatic in Italy in 1944 provided the 15th Air Force with a new base to launch a new series of Air attacks on Ploesti. This time, B-17s and B-24s attacked with fighter escort at high altitude. Losses were again heavy, with over 1,800 air crew lost to FLAK and enemy fighters. Accuracy suffered when defenders used smoke pots to obscure the target, so P-38s were used as dive bombers to penetrate the defenses. Soon P-51s helped to achieve total air superiority over the target. By the end of the Ploesti air campaign in the fall of 1944, 90% of Romania’s oil production was knocked at a cost of 270 bombers and 49 fighters and their crews. Narrated by Ronald Reagan

“B-24s Get Back” Many of the B-24 crews who survived the Ploesti missions swore that they owed their lives to their rugged Liberators. This remarkable film that shows how B-24s overcame incredible battle damage to bring their crews home. Numerous examples of seemingly critically damaged B-24s making it back. This is a fascinating instructional training film too with specific techniques to bring your badly crippled ship down safely. Some great B-24 combat footage too. 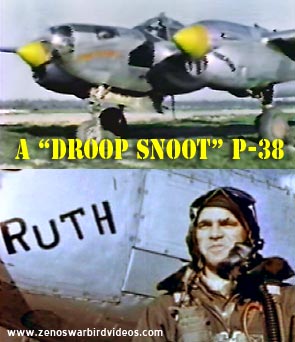 “Back Door Gang P-38s – 430th FS Color Scrapbook” Newly discovered color film of the 430th FS, 474th FG, 9th Air Force. From the get go, the 474th was configured as a ground attack unit, but they also provided bomber escort and level bombing, led by Norden equipped “Droop Snoops.” One of three P-38 squadrons in the 474th, the 430th’s call sign was “Back Door,” and its planes and pilots are featured in the film in the Spring of 1945 at their base in Florennes, Belgium, a former Luftwaffe Night Fighter base. You’ll see intense (and rare) color gun camera film showing strafing attacks inside Germany, as well as color footage of B-26s and a P-61 Black Widow. Perhaps most memorable are the all too brief, silent portraits of the men who flew those dangerous missions. It’s amazing how color film brings 60+ year old images to life

That’s over 14 hours of rockin’ World War II props & jets for free viewing over the Internet!

PS: If you have any concerns about using the RealNetwork’s RealPlayer to watch our videos, I highly recommend using the free “RealAlternative” player instead. (It’s what I use to play all my 'Net videos.) It’s built around the very popular “Media Player Classic” and will play RealVideo files just fine (along with just about every other video format including Quicktime & Windows Media), is independently produced, a very small download and has no annoying advertisements or “music guides.” You can download the RealAlternative player here: