At the Matinee, we’re playing s Quadruple Feature (!). You’ll see a dive bombing Mustang fan favorite in “A Day with the A-36s” (color); the Drive-In premier of an original color classic in “The Memphis Belle;” B-29s launch a long distance strike in “Target Tokyo;“ and a ground crew assemble a P-47 in a farmers field using unpowered hand tools in “Uncrating and Field Assembly of the P-47 Thunderbolt.” Whew – that’s a hot lineup for cold weather! 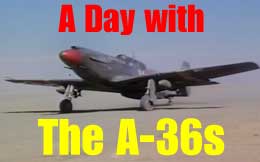 A Day with the A-36s
This unique documentary features very rare color combat footage of an A-36A “Invader,” (ground attack version of the P-51 Mustang) fighter/bomber squadron in action in Sicily. The A-36A was equipped with the Mustang’s original Allison engine, as opposed to the Rolls Royce Merlin adapted so successfully in the escort versions, which worked just fine for low level work. There are dive breaks on the wings too! You’ll also see ground crews doing their critical support work, including fueling, rearming and maintaining these sleek birds. This exciting film includes incredible cockpit views of actual ground attack runs as well as fascinating views of a captured air Italian base. One of the hidden gems in this film are up close views of captured or destroyed Axis aircraft, including an He 111, FW-190, Ju 88, and a rare view of an intact Italian Macchi 202 “Folgore” in full desert cammo. 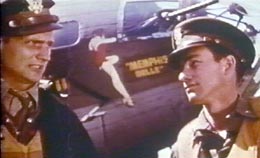 The Memphis Belle”
This film chronicles the 25th mission of the Boeing B-17 Memphis Belle, flying deep into Germany to strike the all important U-boat submarine pens at Wilhemshaven. This is the original wartime documentary, written and directed by legendary Academy Award winner William Wyler. If this film looks and sounds familiar, it’s because this is the same production crew that brought you another wonderful classic, “Thunderbolt!.” (Don’t confuse this “original” Memphis Belle with the well intentionally but flawed Hollywood fluff piece produced in the 1990s.) You’ll see Capt. Robert Morgan and the men of the B-17 “Memphis Belle,” 324th Squadron, 91st BG, going about their deadly business in rare Technicolor footage. The mission shown in the film is both routine and climactic, because 25 missions completed meant the crew could rotate out of combat. (Too many never made it to 25 missions. Bomber losses were high.) It’s a measure of both the times and the men who flew these planes that several of the Belle’s crew signed on for more missions, finishing the War flying B-29s against Japan. See them in Target Tokyo. (below) 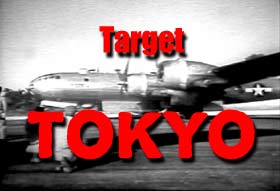 Target Tokyo
Follow the men of the 21st Bomber Command and their B-29 Super Fortresses from their training base in Grand Island, Nebraska, to the newly built air base at Saipan and right into the first 3,000 mile raid on Tokyo. Great up close and personal footage of the lives of air & ground crews, along with rare B-29 combat film shot on that first big raid on the Nakajima aircraft plant. Features cameos of crew members of the famous B-17 “Memphis Belle,” who signed up for another tour of duty to fly B-29s against Japan. Narrated by Ronald Reagan. This film is especially memorable for it’s dramatic use of photo-journalistic style black and white cinematography. It’s as if one of those great photo essays from a World War II issues of “Life” magazine was put right on the screen. 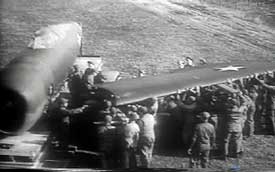 Uncrating and Field Assembly of the P-47 Thunderbolt
This truly remarkable step-by-step training film shows how a ground support crew of fifty men could assemble a P-47 in a field using nothing more than muscle, un-powered hand tools, and pieces of the shipping crate it came in. We’re talking nothing more than hammers, wrenches and bicycle pumps! You’ll also get a unique look at the inner workings of the big Jug as it is literally bolted together buy field personnel. A must see for P-47 fans and shade tree mechanics alike! One of my personal favorites!

That’s over 14 hours of rockin’ props for free viewing over the internet. And, we just updated our “Control Tower” page, where you’ll find hundreds of World War II aviation links.

Have a Merry Christmas & a Happy New Year!