Oh, this really, REALLY cracks me up. 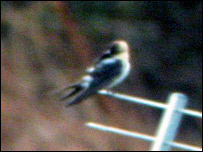 The swallow was spotted briefly before it was eaten.
Birdwatchers who gathered to see a rare swallow on the Angus coast were horrified when they saw it being snatched and eaten by a hungry hawk.
Twitchers headed for Lunan Bay as word spread that enthusiasts had discovered a bird so unusual that it was last seen in the area 20 years ago.

However, the red-rumped swallow, which is usually to be found in the southern Mediterranean, did not last long.

A sparrowhawk swooped and snatched the swallow from the roof of a building.

Mike Sawyer, a member of a Dundee group comprising RSPB members, said: “We were absolutely horrified. That’s life I suppose.”

An RSPB spokesman added: "It’s very unfortunate that it was devoured after such a short space of time, and before more people had seen it.

"Sparrowhawks do feed on small birds, and this one was probably not a great student of what is rare and what is not.

“Sadly, it is just one of those things.”

I’m afraid that my planned trip to Scotland will suffer a certain delay…:eek:

OT
MonsTTer, I doubt there’s anything big enough to eat you …

… at least, if you stay away from your namesake in Loch Ness

Back on topic, I was saddened to hear that the swallow was swallowed, but that’s nature.

Gawd no Flash it would eat you all up

But alas i am with Painter here . It is sad to hear that this poor little swallow was swallowed by a swallower of swallows the swallowhawk emmm i mean the sparrowhawk :roflmao:

I just find the irony of it all very funny, sad as it was for the poor little swallow.

I think there was an even more shocking incident some years ago when a seal got rescued from an oil spill in Pugent Sound, US. It was cared for, treated, given love and attention, until it could be released into the water again, only to be promptly eaten by an Orca whale :eek:

Survival of the fittest

Perhaps it was just youthful exuberance on the Sparrowhawks part?

We usually prefer to export what we have in excess: vultures, crows, seagulls…:roflmao:

I guess Milan City Hall would be much interested in Scottish Birds of Prey…to help getting rid of those thousands of shitty Piazza Duomo pidgeons!!!:w00t:

LOL you have problem with pigeon or shit in Milan ? :roflmao:

Piazza Duomo is a pidgeons’ shityard!!!

And stupid nannies & tourists keep on feeding them!!! :KTA:

Piazza Duomo is a pidgeons’ shityard!!!

And stupid nannies & tourists keep on feeding them!!! :KTA:

We used to have the same problem in Trafalgar Square. The pigeon problem was so bad they were forcing out the london sparrows. Now they are gone and the sparrows are on the increase we have idiot people trying to force the Mayor bring back the flying rat (AKA pigeon)

No, a real Maverick.

if it’s scottish it will eat anything , with no mercy shown and as for sparrow hawks well their much the same

is a trashawk :roflmao: :roflmao:

I’m getting deep-fried sparrowhawk in batter. Pre-stuffed with a rare bird