Saw it, go see it! Better than Flags of our Fathers. Rarely do you see a movie portraying the Japanese side of the war. Two thumbs WAY up!

Whats it about Osp ? Can you give us a review mate ? 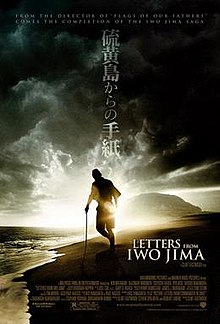 Letters from Iwo Jima (硫黄島からの手紙, Iōjima Kara no Tegami) is a 2006 Japanese-language American war film directed and co-produced by Clint Eastwood, starring Ken Watanabe and Kazunari Ninomiya. The film portrays the Battle of Iwo Jima from the perspective of the Japanese soldiers and is a companion piece to Eastwood's Flags of Our Fathers, which depicts the same battle from the American viewpoint; the two films were shot back to back. Letters from Iwo Jima is almost entirely in Japanese, although ...

I don’t think it’s out over here?
There have been a few good reviews of this one

I saw the movie yesterday together with my son (21 YO).
We both like it very much.
It’s true: it is more complex and moving then Flags of Our Fathers.
Clint Eastwood is a great storyteller.

History is always written and told by the winners. In this movie it is not true.
Definitely something that deserves to be seen.