Joe Peterburs enlisted in the US Army Air Corps on the 30th of November, 1942 and was called to active duty as an Aviation Cadet on 26 January, 1943. On 15 April, 1944 after a rigorous flying training program, he received his pilots’ wings and commission as a 2nd Lieutenant. After graduation he flew the P-40N and A-24 during combat replacement training. On 6 November, 1944 Lt. Peterburs arrived in England and was assigned to the 55th Fighter Squadron of the 20th Fighter Group. He was 19 years old. The unit was equipped with the P-51 and he quickly checked out in a P-51B and accumulated about 20 hours in the B, C and D models before flying combat. He flew many memorable missions, the 49th and last of which was the most exciting. On this mission, 10 April, 1945, Joe Peterburs shot down an Me 262 turbo jet piloted by the renowned German Ace Walter Schuck. Later that day Joe Peterburs was also shot down by enemy ground fire while strafing an airfield. He was captured, escaped and fought with a Russian tank unit to the battle of Wittenberg on the Elbe. 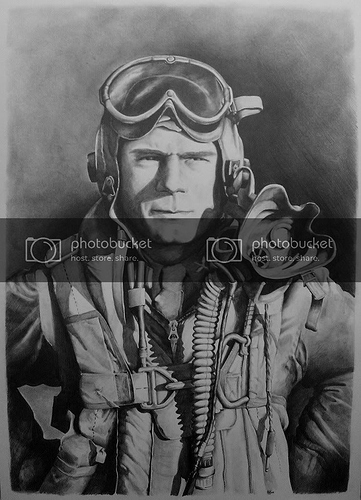 One of your best mate, great work

Absolutely one of your best, Puff!

And all your others are great as well, but this really has a special something.

Have you let Joe Peterburs see it yet?

Thi has also the “soul” of the pilot inside…

Thanks folks…Joe, this is what Joe had to say…

Puff, This is you most beautiful, photo-realistic and emotional off all your great drawings!

Simply fantastic, I have no words!!:eek::eek::eek:

Let me just finish this reply so I can continue staring at your awesome drawing of ‘Josephine’s Beau’!