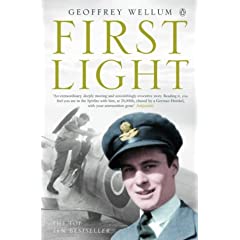 Last week I was in Woking (near London. You know: just where the Martian landed - H.G.Wells’ Wold’s War). I was in a bookshop and I bought this very good book, written by a young 17 year old RAF pilot fighting the BoB.

When he was just 17, Geoffrey Wellum joined the RAF in August 1939 and served with 92 Squadron throughout the Battle of Britain. In 1942 he went to 65 Squadron at Debden as a Flight Commander and from there to Malta later that year. He led 8 Spitfires off HMS Furious to Luqa during Operation Pedestal.
A book that deserves to be raed

A very good book that deserves to be read
You can read a review here:
http://www.accampbell.uklinux.net/bookreviews/r/wellum.html
http://www.penguin.co.uk/nf/Book/BookDisplay/0,,9780141804842,00.html

Seconded Bear, this is an excellent read, well worth adding to your library.

I have this book as well, 1st Edition hardback with a photograph of and signed by the man himself.

Have just finished reading Geoffrey Wellum’s First Light. Sadly Wellum passed away last year (2019) he was one of the last surviving BoB pilots. What I like about his story is that is is an honest account from an ordinary pilot from an ordinary back ground. I was struck by the apparent hardness of the training pre RAF and once in the RAF. As an average pilot he had to work very hard to qualify. Then he arrives into the famous 92 Squadron on Spitfires having not passed through an OTU and with 5 hours missing on his normal training program and 0 hours on Spits. So he learns on the job. He speaks kindly about all sorts of later famous pilots, of their flying and leadership qualities. When he gets round to talking about operations I like that he gives quite some details about pre-flight and starting procedures - also cruise settings etc; This is clearly written for those who have had some cockpit time. I love the chapter where he chases a Ju88 in very bad weather and execrable visibility out into the North Sea, how he had trouble getting back, with a cloud base at 500 ft, how he finally managed to work out where he was, the strain of flying on instruments and the fear of messing up. All that to get back to base with some large element of luck and to be told off by his boss for taking unconsidered risks. In sims we tend to fly in broad daylight with good visibility trying to spot dots miles away. In his book Wellum talks about flying in weather, where the danger is not just from the enemy. We should add more variable weather conditions to our missions to add a further level of stress to flying even normal missions. Compared to other pilot accounts, like Paul Ritchey’s “Fighter Pilot”, Wellum’s account is more down to earth, whereas Richey who came form a more wealthy background talked a lot about parties, dinners, champagne, women in his off duty periods and not so much about the techniques of flying. The interest in his book is more about the Battle of France where we learn how badly the Hurricanes were used in the conflict, with unabashed criticism of RAF strategy but I didn’t like the his rather gung-ho attitude to daily squadron life.
I highly recommend Wellum’s book and there are about 3 or 4 times where strong emotion is felt by the reader.