DVDs I got last week

I can thoroughly recommend Cadfael, the monk (Derek Jacobi), who solves crimes in medieval Shrewsbury. Produced after the novels by Ellis Peters. Its really really nicely done.

I also got “Winds Of War”. I already introduced the books by Herman Wouk lately here: http://www.europeanaf.org/forum/showthread.php?t=8600

I eventually got it now as region code 2 version DVDs…great!

And I ordered [b]Hornblower[/b] . I didn’t look that series yet, but I think its great as well. More on that later.

I think you’ll enjoy Hornblower. Have you read any of the books? If not I can recommend them as well. The television storylines are approximately the same chronologically, but (obviously) you don’t get the detail.

Hornblower and the one with Sean Bean in the Greenjackets rifle battalion. Mrs Ming’s favourites. Anything where they get their kit off all the time. She told me she liked blokes who look like gypsies (paraphrasing) when we started out. As fantasy objects this must be

Robert Shaw in ‘The Buccaneers’, I haven’t dared tell her about that one cos I wore a shirt like that once. Just the once lol

I can thoroughly recommend Cadfael, the monk (Derek Jacobi), who solves crimes in medieval Shrewsbury.

I didn’t read the books yet Keets…

and the one with Sean Bean in the Greenjackets rifle battalion

I think thats Sharpe Ming. I only heard good critics about that series and it was recommended to me by my British teammates at work…and they say Deadwood was just great…something for future orders maybe…

The Sharpe series are enjoyable, both as books and TV. It does show that they don’t have the full budget to fight the full battles detailed tho

Deadwood is highly recommended, but be warned it does contain alot of swearing

Recently I bought the extrended version of “Der Untergang”, looking forward to see that one. Also “Come and See”, a soviet WWII movie which used live ammo in some battle scenes for authenticity

Only read the books about Cadfael (pretty good, though slightly repetitive), Hornblower I have seen a few on TV, was pretty good as far as I can remember, was a really long time since I read the books, only faint memories of them…
Winds of War had a big part in getting me interested in WW2, I wouldn’t mind seeing that again (have of course also read the books).

I’ve seen some of Deadwood on TV, but as I don’t have time to stick to scheduled TV times, I missed a lot of it.

Got all of Sharpe (really like his style and the show). I did start watching Deadwood, really like their no-holds barred realism, but like Mikke, I couldnt keep with the scheduled times. Kept missing it. I also really like 24 too though I would like to watch the whole series fully one day. Caedfaels good too, but not seen that in a long while.

p.s. just saw 300. Now thats my kinda film. Sometimes I like something where you dont have to think, stick with your team and don`t give a toss what anyone else says. With lots of blood added for good measure. 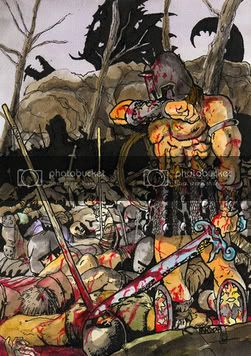