Interesting news in the last post from Bignewy!
Let’s hope it will be extended to WWII ops too!

The EDDCE Dynamic Campaign Engine will be a part of the DCS Core, allowing the creation of special campaigns where air, sea and land units do not have pre-created tasks, but are rather controlled by the strategic AI. Each side initiates the campaign on the basis of start conditions of the conflict this includes offensive or defensive position, asset resource list (including HQs, factories, warehouses etc), and specific objectives which are created from the onset for each individual campaign design. When a campaign starts, the strategic AI initiates the tasking process (ATO Air Tasking Orders, Ground tasking and Naval Tasking etc) for each unit in the side’s asset list and order of battle. This process of tasking and decision making is ongoing for the duration of the campaign and is a function of assets remaining and reinforcement and resupply cycles. It is important to remember that the player can take control of any AI unit and participate in its mission task and/or take indirect control over the strategic AI decisions, in addition to direct control over specific tasking orders.

After having completed the global structure of the Dynamic Campaign Engine in 2021, 2022 saw substantial fine-tuning of the system’s individual components. For example, our general scheme of ATOs was built starting from defensive combat air patrol operations along borders, through all subsequent stages, including SEAD suppression of enemy air defenses, air superiority, CAS close air support, interdiction and deep strike. Ground equipment and operations also received a lot of attention. In addition to the actual movement of units to perform their assigned mission, a mechanism was created for correctly tasking vehicles in a group based fashion depending on their tactical situation: attack, defense, or transit. 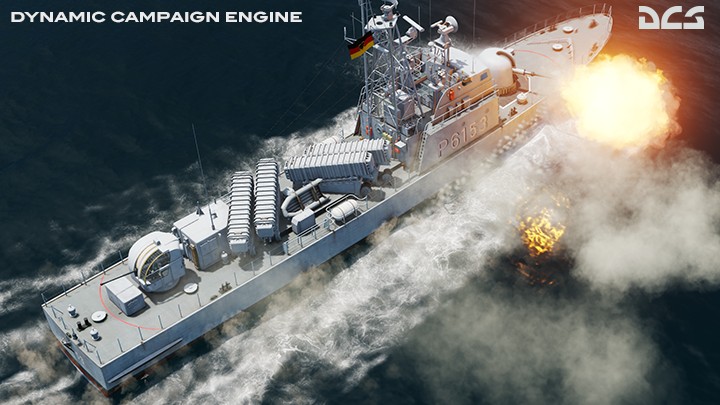 To increase the number of units in the campaign without over-tasking the CPU, only units that are ‘visible’ to the player or that ‘see’ the player (eyesight and sensor range based) are fully calculated. For the remaining units, lighter algorithms are used which are based on pre-calculated data sets. It is good to note that when preparing such data, separate mechanisms are used in EDDCE to easily process all upcoming equipment and weapons which will be added to DCS. To ensure that unit calculations do not negatively affect gameplay, seamless transitions between the lighter and the fully-fledged calculation models have been implemented. This will allow the player to see all the units in their correct place, performing their tasks while moving across the entire map. When interacting with the player, all units use the normal DCS algorithms.

Another important task that received attention this year is the ‘front-line’ system. A new model of multiple front-lines has been implemented that allows for a more illustrative picture of breakthrough and encircling maneuvers. During 2022, the main engine elements were tuned, allowing campaign management to be more automated, based on the dynamic situations as they evolve in the campaign. Please do follow our news for more information on this exciting core element of DCS.

Let’s hope it will be extended to WWII ops too!

looking forward to seeing “hope” turn into “roadmap” for WWII