Another old short good movie about A. de Saint Exupery

I was searching this since long time, as I remember I have seen it years ago. It was in German language. Now I found a link with English subs.
The film is based on the short story “Ein ganz gewoehnlicher Abschuss” von Rudolf Braunburg. The hangar used as a location was an vintage original from the 1930s at Mannheim Airport.

STORYLINE:
July 31, 1944: Somewhere in the south of France a German fighter pilot comes back from a sortie over the Mediterranean Sea. Leutnant Mueller jumps down from his Messerschmitt fighter and reports, obviously pleased, that he has shot down a Lightning reconnaissance plane. Mueller and his comrades celebrate the kill in the officers mess, with booze and jokes, as it is still fashionable, even at this stage of the war. They indulge in political uncorrectness, as they are the elite of the Luftwaffe. Mueller recalls the combat. His prey didn’t even see him come. He was hit out of the blue, in the truest sense of the word. As the emotions cool down a bit, an orderly comes into the mess and hands a copy of the combat report to Mueller. The orderly mentions that the other side has stated the name of the missing pilot of the Lightning. He says the name, and we can read from the faces of the pilots that part of their world comes tumbling down: Mueller has killed Antoine de Saint-Exupery, the “father” of the Little Prince. The story is told by the older Henrici, who remembers it, sitting at his writing desk. He recalls that far away summer day that has changed his life and the way of literature forever.

and now take your time (10 minutes only) and enjoy the movie: 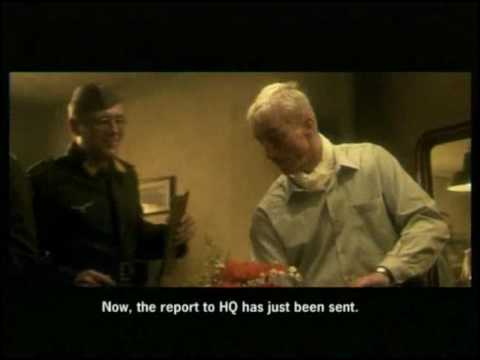