The other day I mentioned after a mission that I felt that a certain Mr Classic bore some “leadership resemblance” to a certain Denys “kill em” Gillam of the RAF. Bold and courageous but whose orders and missions sometimes must have made his Squadron pilots scowl and let out nervous sighs.

I became fascinated by the person from the books I’ve read and have collected a couple of texts about him. 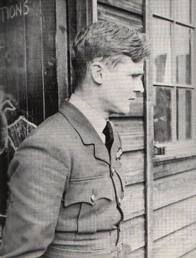 Group Captain Denys Edgar Gillam DSO with two bars, DFC with bar, AFC was born in Tyneside in 1915. He obtained his flying licence in 1934 and joined the RAF the following year. In June 1938, Denys received the AFC for flying food to Rathlin Island in very hazardous conditions. During the Battle of Britain he served with 616 Sqn very successfully, was awarded the DFC in November 1940 and then the Bar to the DFC in October 1941. The following month Denys was shot down by flak and picked up by Air Sea Rescue Launch off Dunkirk and in December was awarded the DSO. March 1942 saw him forming the first Typhoon Wing at Duxford and subsequently taking command of 20 Sector 2nd TAF in April 1944. In August 1944 Denys was awarded the Bar to his DSO and in October of that year he led an attack on the German Staff Conference at Dordrecht which killed many of the senior staff of the 15th Army. Denys was awarded the second bar to his DSO in January 1945 and left the RAF later that year. Post-war he was Director and Chairman of Homfray Carpets in Halifax and Deputy Lord Lieutenant of North Yorkshire, before his death in 1991. Denys was widely held to be one of the greatest exponents of the potential of the Typhoon.

Following are some excertps from various books. (I have read more about DG but have failed to locate them) :

‘Kill’ em’ Gillam was something of an RAF legend. Having survived the Battle of Britain, during which he claimed six enemy aircraft destroyed and another ten probables, he had led a Hurricane Squadron on anti-shipping attacks in the English Channel. Under his leadership, they perfected skip-bombing techniques, borrowing from Luftwaffe tactics which Gillam had studied in depths. These operations were so hazardous that an operational tour with the Squadron was limited to one month. Gillam had personally destroyed thirty-two ships but lost thirteen wingmen in the process. He seemed to live a charmed life.

In april , Denys Gillam, my old flight commander from the early days in 616 Squadron, was posted to Duxford as Wing Commander flying and we began to train as a Wing, when serviceability allowed. Gillam had earned a reputation for quite outstanding gallantry since I had last served with him. He had been in charge of a Squadron at Manston engaged in daylight attacks against enemy shipping. It was excessively dangerous job and losses were high. But by a miracle Gillam, who had, as was always his way, led from the front, survived. In the end he was quite badly wounded, but managed to get back to base. No doubt that wound saved his life, for had he continued at that particular game much longer he must surely have been killed.

One of my fellow Wing Leaders was Denys ”Killer” Gillam, who led 146 Wing, and who was known to be quite a fearless pilot, who it could be quite dangerous to follow. During this period ( I think it may have been about the start of April), Denys invited me to tag my wing onto his for an attack on a target at cherbourgh – then noted for the feriocity of its flak defences. Realising that we would be arriving last, when the defences were fully alerted, I was not overwhelmingly keen or enthusiastic, but we went along nontheless. As I anticipated, flak was vile by the time my boys arrived, and we took a fair pasting. I landed back in pretty foul mood, blazed into his debriefing and uttered a stream of fairly specific invective regarding his parentage, judgement etc. Unfortunately, what I did not know was that Denys was just in the process of being promoted to Group Captain to take over command of our 20 sector…/… Not very diplomatic, I fear, and it may well have had something to do with the posting I received a few days later.

…I didn’t have a permanent no 2, which was different sometimes to other wings. I didn’t because a No 2 got shot down so often that it was unfair to have a permanent one. The Germans used to shoot at the leader and generally miss him and hit the no 2!

At which Norman Franks added underneath:

Denys Gillam rarely had a permanent no 2 either – it just wasn’t fair on the individual. He too tended to ask one of his Squadron commanders to detail someone on each operation.

…The pilots who went in with reservations and sort of pulled away or attacked half-heartedly, invariably got clobbered. They seemed to attract the flak because they’d not pressed on vigorously.

I did a trip with Group Captain Gillam once. His fashion was to say to the CO, ‘Got someone to fly with me?’ - and the CO migh say, ‘Ok, Shannon, you go’ , and he’d take you up. Just the two of us, leader and wingman to cover him. He went for the fun of it really. If he saw anything moving he’d go down and you’d follow, keeping on his tail and shoot when he shot, pulled up when he pulled up, then come home.

In the last year of the war I tended to fly the more interesting sorties although I generally flew every other day or something like that – just going out. But anything really interesting I’d certainly fly.

…This particular attack was to be made by 193 Squadron led by Wing Commander Johnny Wells, with 197 Squadron led by myself, doing the low level attack. If my memory is correct, I think Group Captain Gillam also came along for the ride.

He should have come off ops in february 1945 when he was posted to 84 Group HQ but he virtually ignored that and continued to fly with the wing although Johnny Wells was now the Group Captain. Gillam now had the DSO and two bars, the DFC and bar plus his 1938 AFC. He had been operational since 1939, flown in the Battle of Britain, led two czech squadrons in 1940-41, been on anti-shipping Hurricanes during the Channel Stop Campaign in 1942, then on Typhoons virtually ever since. When, after the war, he applied for his campaign medals, he was refused the Defence Medal. The letter from Air Ministry read:

Obviously Denys Gillam had been too operational!

After the war he left the RAF and started selling carpets.

DISTINGUISHED FLYING CROSS (DFC)
Rank: Flight Lieutenant
Unit: No. 616 Squadron, Royal Air Force
Awarded on: November 12th, 1940
Action: Citation:
“This officer has been responsible for the destruction of seven enemy aircraft and probably of four more, and has damaged six. On one occasion during a combat with a large force of Messerschmitt 110’s, he shot one down and his own aircraft caught fire. He descended by parachute and returned to his station in time to lead the next patrol.
On another occasion Flight Lieutenant Gillam shot down a Junkers 88 and landed within eleven minutes from the time he took off.”

DISTINGUISHED FLYING CROSS (DFC)
Rank: Squadron Leader
Unit: No. 615 Squadron, Royal Air Force
Awarded on: October 21st, 1941
Action: Citation:
“Recently this officer’s squadron has carried out 24 sorties against enemy shipping in which 11 ships were destroyed, 5 were left burning and 18 were damaged. Squadron Leader Gillam led the squadron on 10 of these missions and displayed outstanding courage and enthusiasm, taking every opportunity to seek and destroy enemy vessels.”
Details: Second DFC awarded a s a bar for on the ribbon of the first DFC.

DISTINGUISHED SERVICE ORDER (DSO)
Rank: Squadron Leader
Unit: No. 615 Squadron, Royal Air Force
Awarded on: December 12th, 1941
Action: Citation:
“This officer has led the squadron with conspicuous success against enemy shipping which, escorted by armed ships, were passing through the Straits of Dover. He has participated in every attack and has displayed fine leadership and enterprise. Throughout, Squadron Leader Gillam has displayed great daring and he has set a magnificent example which has undoubtedly contributed materially to the notable successes achieved.”

DISTINGUISHED SERVICE ORDER (DSO)
Rank: Acting Group Captain
Awarded on: January 23rd, 1945
Action: Citation:
“Since being awarded a bar to the D.S.O., Group Captain Gillam has completed more than 80 sorties, involving attacks on enemy troop and tank concentrations, ammunition stores, locomotives and other targets on the ground. Within recent weeks, he has led formations of aircraft against several important and heavily defended targets. These missions called for a high degree of skill and resolution and the success achieved is a splendid tribute to this officer’s outstanding leadership and ability. He has set an example of a very high order.”
Details: Third DSO awarded as second bar for on the ribbon of the first DSO