Looking for Italian Accounts from the Eastern Front

A friend of mine is doing some research.

He is trying to find some first hand accounts from Italians fighting on the Eastern Front. I said I knew the very people to ask

Does anybody have any good information or knows a good place to look?

Hi Joe. I have a really long list of books, but all of them are in Italian language.
If they are OK for your friend, I can send you the list, including a short summary of each book. - Let me know.

Many thanks Bear, but I’m afraid he doesn’t speak Italian :o

Sorry, I should have said. He is looking for references to books or websites in English.

I suppose you already know these links: 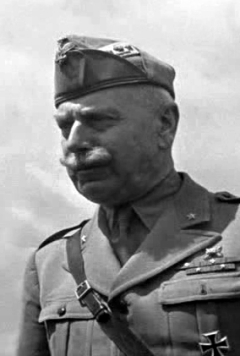 Italian participation in the Eastern Front

The Italian participation in the Eastern Front during World War II began after the launch of Operation Barbarossa, the German invasion of the Soviet Union, on 22 June 1941. To show solidarity with his Axis ally, Italian dictator Benito Mussolini ordered a contingent of the Italian Royal Army to be prepared for the Eastern Front and, by early July, an Italian force was in transport. From 1941 to 1943, the Italians maintained two units on the Eastern Front. The first Italian fighting force was a c...

and this, about our own Dunkirk (on foot!): 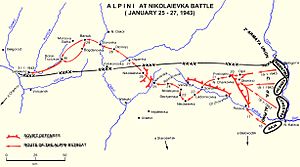 The Battle of Nikolayevka was the breakout of Italian forces in January 1943, as a small part of the larger Battle of Stalingrad. The breakout involved a corps of the Italian 8th Army's near the village of Nikolayevka (now Livenka, Belgorod Oblast, in Russia). The Italian 8th Army's Alpini (Mountain) Corps, consisting of the 3rd Julia, 2nd Tridentina and 4th Cuneense divisions and the 156th Vicenza Infantry Division to their rear, were at this point largely unaffected by the Soviet offensive on ...

Please note that the greatest book about Italians in Russia has been also published in English:

Mario Rigoni Stern: “The sergeant in the snow” (Marlboro Press - 1998)

Is is really first hand: Rigoni was an Alpini Troops Sergeant…fought Germans after coming back from Russia, and was consequently sent to a Lager in Germany…

Thanks MonsTTer for suggestions. I will look if any other book about Italians in Eastern Front was translated in English.
A few of them here following.

The following is a novel, but based on real facts happened to the author, who fought on the Eastern Front. Anyway worth to be read:
Eugenio Corti - The Red Horse
http://www.amazon.com/Red-Horse-Novel-Eugenio-Corti/dp/0898707471

I will look for more titles in English

These are great, thanks Bear and Monstter.

I really didn’t know where to begin. I am only very slowly learning more about Italian campaigns and it looks like I have a lot more to learn.

I’ll pass these suggestions on this evening.